Annie Lennox, international singer and UNAIDS Goodwill Ambassador, has been awarded the Order of the British Empire (OBE), an honour conferred by Queen Elizabeth II. The announcement was made on 31 December as part of the 2011 New Year Honours list.

The honour recognizes Ms Lennox for her commitment and dedication to the global AIDS response and supporting development goals to end poverty. 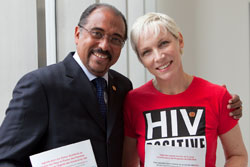 Michel Sidibé and Annie Lennox at a gender and HIV event in New York in 2010. Credit: UNAIDS/B. Hamilton

Since becoming a UNAIDS Goodwill Ambassador in 2010, Ms Lennox has advocated for the greater inclusion of women in national HIV programmes as well as ending violence against women and girls.

“On behalf of the UNAIDS family, I congratulate Ms Lennox on receiving this prestigious award,” said UNAIDS Executive Director Michel Sidibé. “Ms Lennox is a tireless advocate for the voiceless and serves as a role model for millions of people around the world.” END_OF_DOCUMENT_TOKEN_TO_BE_REPLACED

As the world enters into the 30th year of the AIDS epidemic, UNAIDS will work to position the HIV response in a new global environment. Ten years after the United Nations Special Session on HIV/AIDS and the landmark adoption of the Declaration of Commitment on HIV/AIDS, member states are now preparing for the 2011 High Level Meeting on AIDS to review and renew future commitments for the AIDS response.

UNAIDS will be guided by the new UNAIDS strategy 2011–2015, which aims to advance global progress in achieving country set targets for universal access to HIV prevention, treatment, care and support and to halt and reverse the spread of HIV and contribute to the achievement of the Millennium Development goals by 2015. END_OF_DOCUMENT_TOKEN_TO_BE_REPLACED

GENEVA, 29 December 2010—The Joint United Nations Programme on HIV/AIDS (UNAIDS) congratulates Mr Bertrand Audoin on his recent appointment as Executive Director of the International AIDS Society (IAS) an association of HIV professionals with more than 19,000 members from some 190 countries working at all levels of the global response to AIDS.  END_OF_DOCUMENT_TOKEN_TO_BE_REPLACED

Innovations in governance are among the signature achievements of the AIDS response and these innovations have transformed the lives of people living with and affected by HIV. This is one of several key points covered in a compilation co-guest-edited by UNAIDS Executive Director, Michel Sidibé, published on 20 December in a special issue of Global Health Governance. END_OF_DOCUMENT_TOKEN_TO_BE_REPLACED

UNAIDS – A year in review 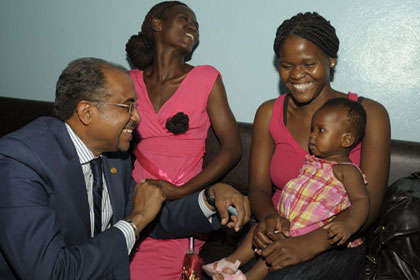 2010 has been a landmark year in the AIDS response. In February, UNAIDS Executive Director Michel Sidibé visited Swaziland to see the progress underway in providing HIV services. Credit: UNAIDS/Williams.

2010 has been a landmark year in the AIDS response. In November UNAIDS reported that the AIDS epidemic had been halted and that the world is beginning to reverse the spread of HIV. In its flagship report, the 2010 UNAIDS Report on the global AIDS epidemic, UNAIDS reported that the rate of new HIV infections had been reduced by nearly 20% in the past 10 years, that AIDS related deaths had been reduced by nearly 20% in the last five years and that the total number of people living with HIV had stabilised. END_OF_DOCUMENT_TOKEN_TO_BE_REPLACED

South African Health Minister Dr Aaron Motsoaledi has announced that South Africa has successfully negotiated a range of price reductions for antiretroviral treatment in a bid to increase access to treatment for people living with HIV.

“It is my pleasure to announce the massive reduction in the prices of antiretroviral drugs which has resulted in the 53.1% reduction in the cost of the total tender,” said Dr Motsoaledi. “South Africa can now afford to treat twice as many people on ARVs compared to that which was previously budgeted.” END_OF_DOCUMENT_TOKEN_TO_BE_REPLACED

Leaders call on countries to optimize resources for the AIDS response 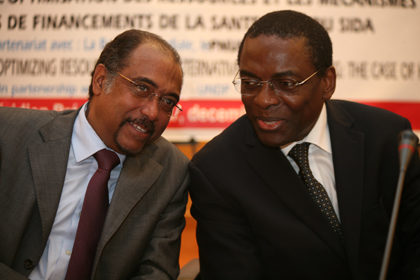 Ministers of Health and Finance from West and Central Africa joined representatives from civil society, the private sector and the United Nations for a discussion on financing and sustaining the AIDS response in a resource-constrained environment. Participants in the meeting, co-hosted by the Joint United Nations Programme on HIV/AIDS (UNAIDS) and the World Health Organization (WHO), reflected on the impact of the global financial crisis, risk management, alternative funding sources, and optimizing the use of available resources.

GENEVA, 14 December 2010—UNAIDS is deeply saddened by the death of AIDS advocate, Ambassador Richard Holbrooke. During his lifetime, Ambassador Holbrooke was a staunch supporter of the AIDS response and a valued partner of UNAIDS.

Whilst serving as United States Ambassador to the United Nations, Ambassador Holbrooke was instrumental in organising the very first special session of the Security Council on HIV/AIDS in January 2000. END_OF_DOCUMENT_TOKEN_TO_BE_REPLACED

Through this partnership, IDB and UNAIDS will collaborate on maximizing available resources and sharing information on HIV prevention and control measures. The two agencies will also pay special attention to measures aimed at preventing HIV transmission from mother to child. According to UNAIDS estimates, 1.4 million HIV-positive pregnant women live in low- and middle-income countries. In 2009 alone, there were an estimated 370 000 new HIV infections among children worldwide. END_OF_DOCUMENT_TOKEN_TO_BE_REPLACED

GENEVA, 10 December 2010—The World Health Organization (WHO) has endorsed a new diagnostic test that can diagnose tuberculosis (TB) and multidrug-resistant tuberculosis in less than two hours compared to the current standard test which can take up to three months.

The new rapid diagnostic test could result in a doubling in the number of HIV-associated TB cases diagnosed in areas with high rates of TB and HIV and a three-fold increase in the diagnosis of patients with drug-resistant TB. END_OF_DOCUMENT_TOKEN_TO_BE_REPLACED